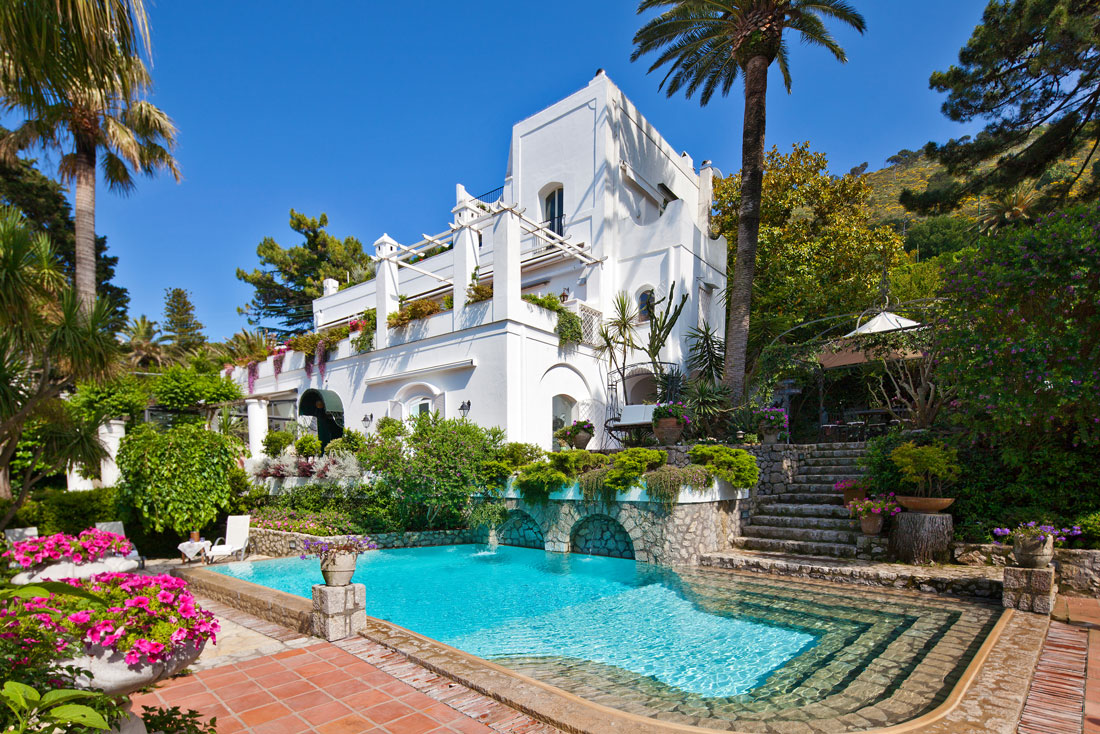 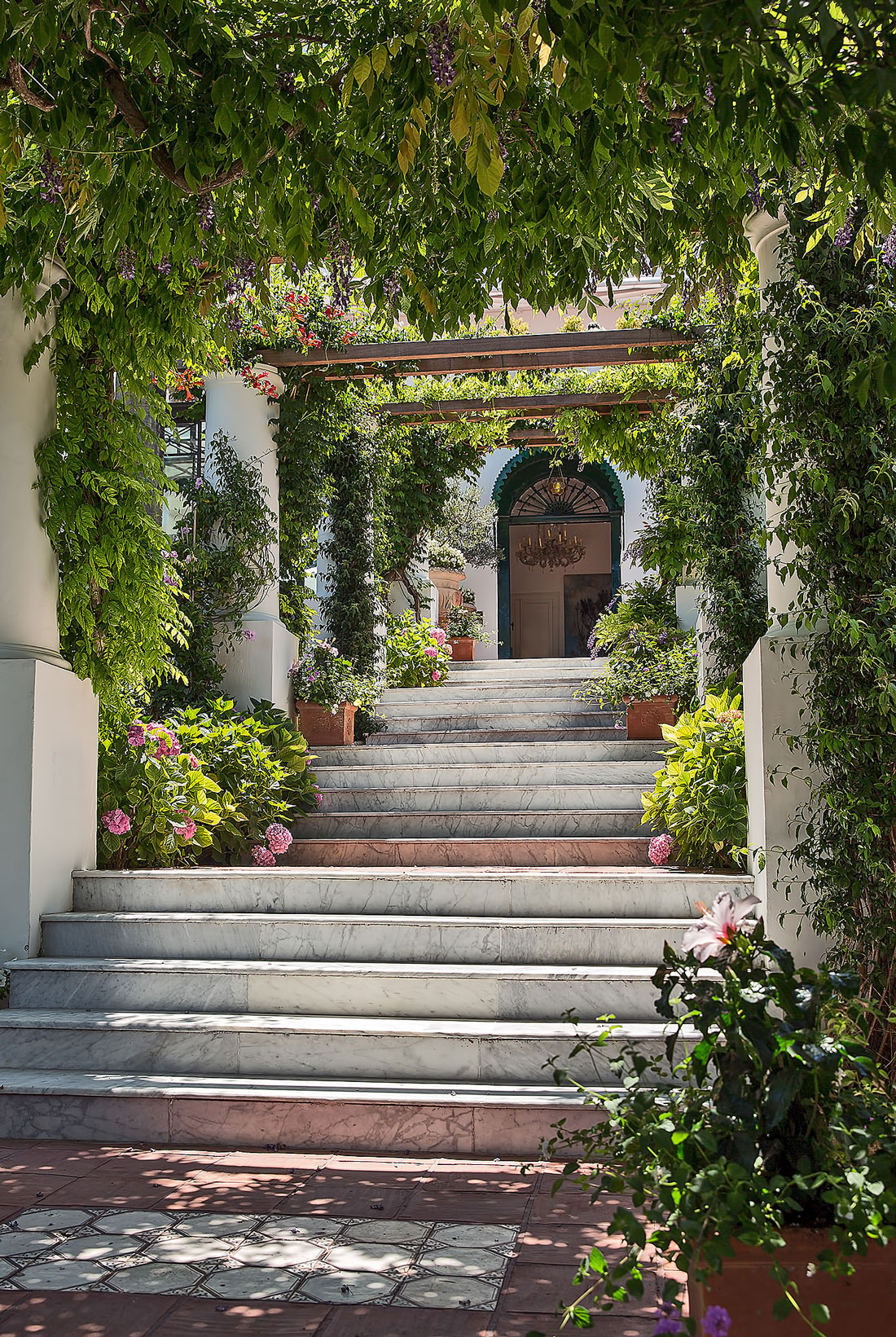 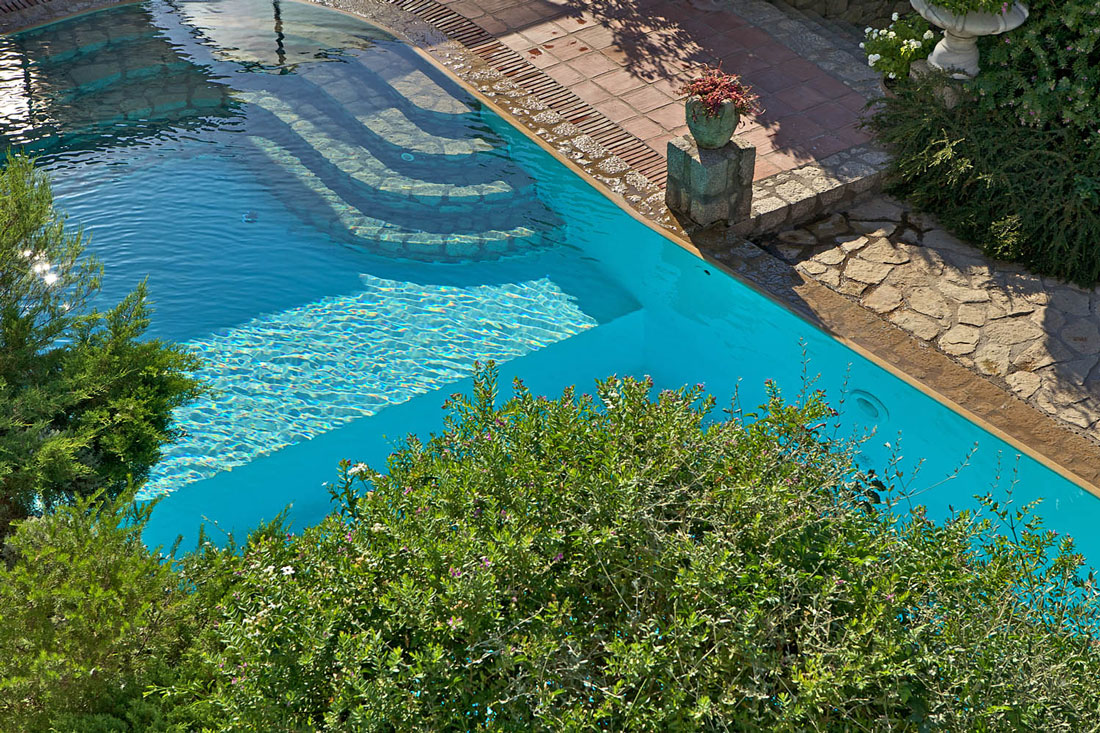 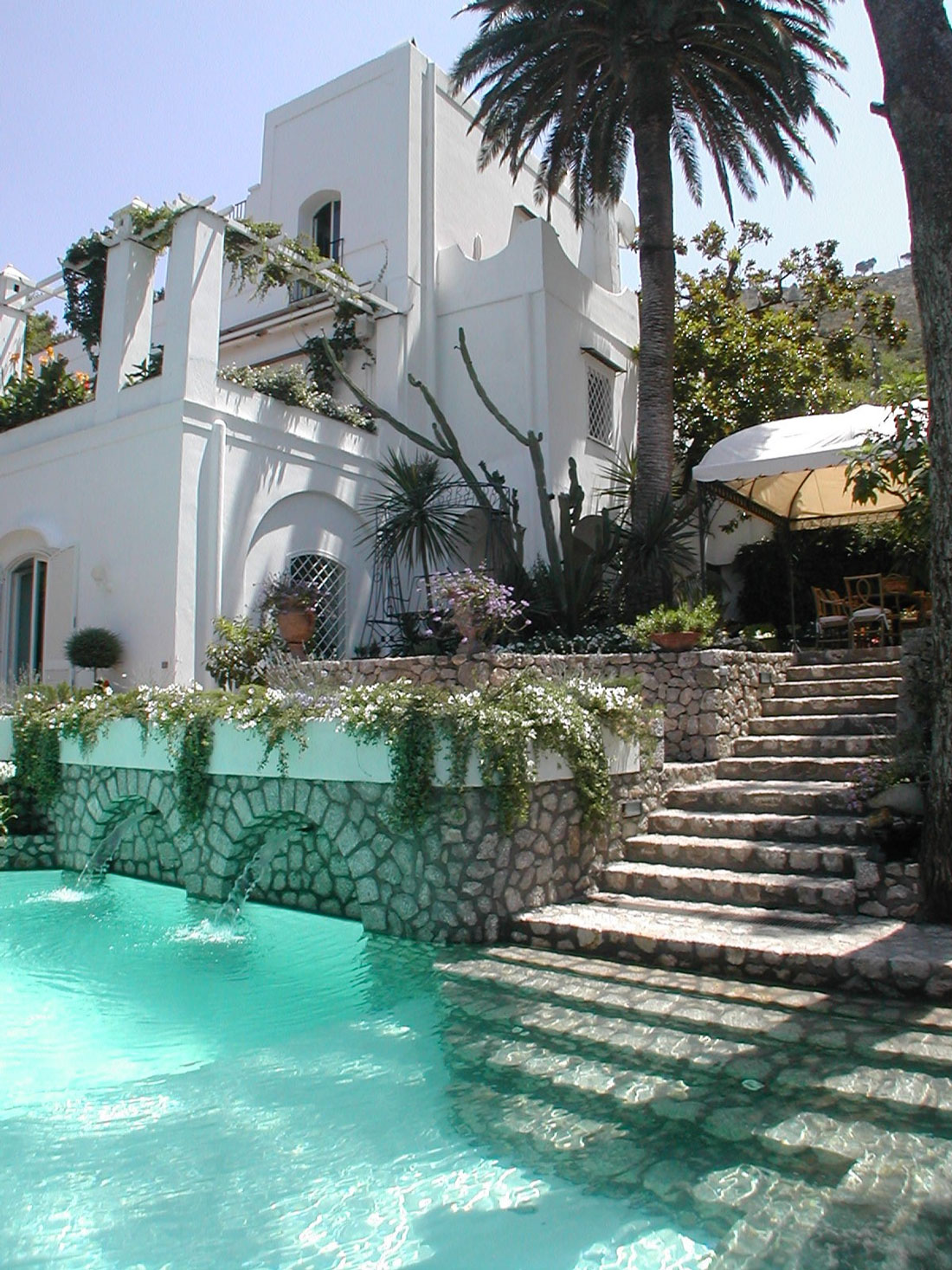 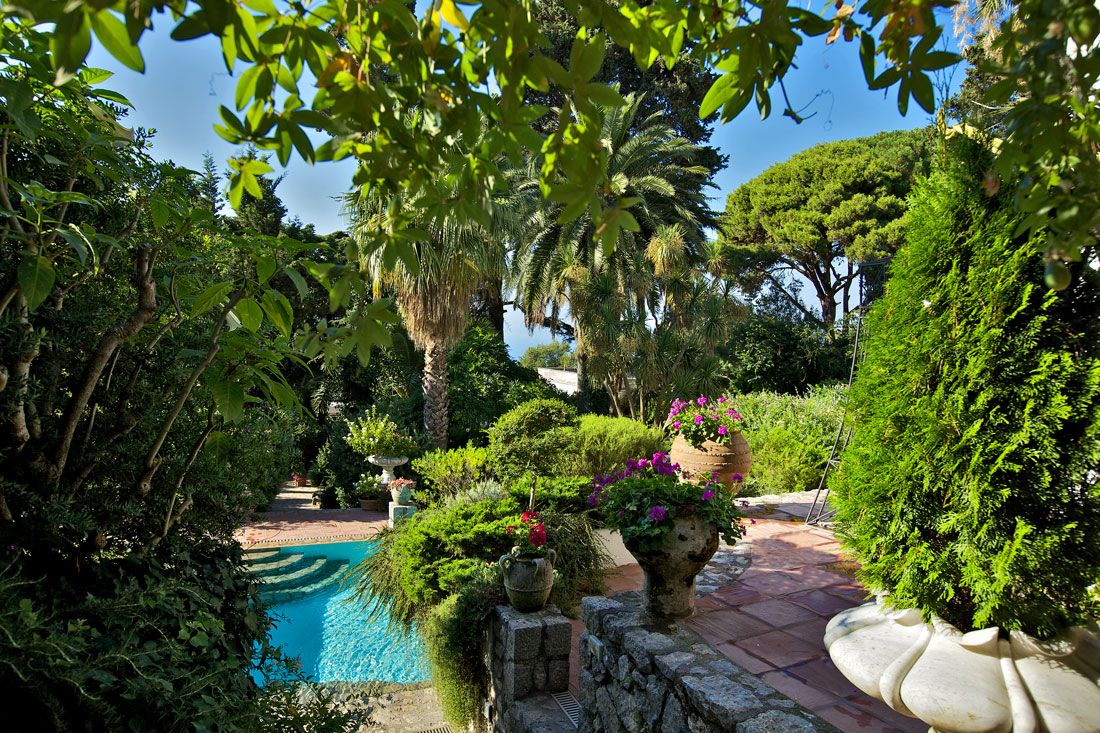 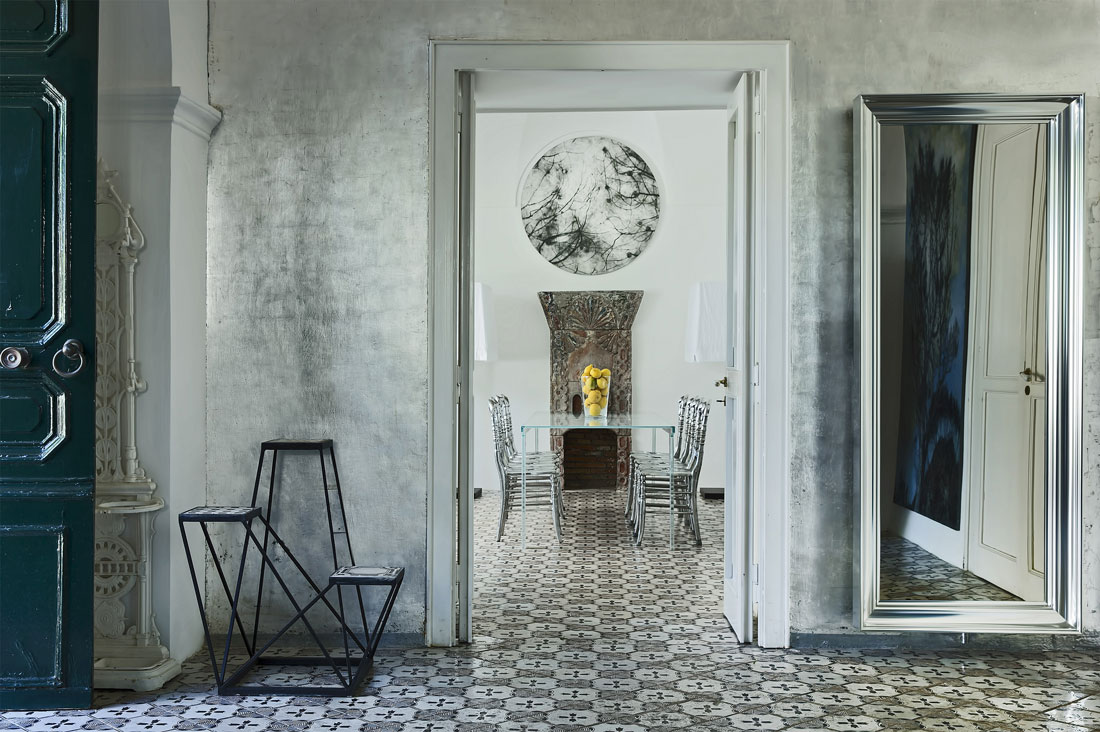 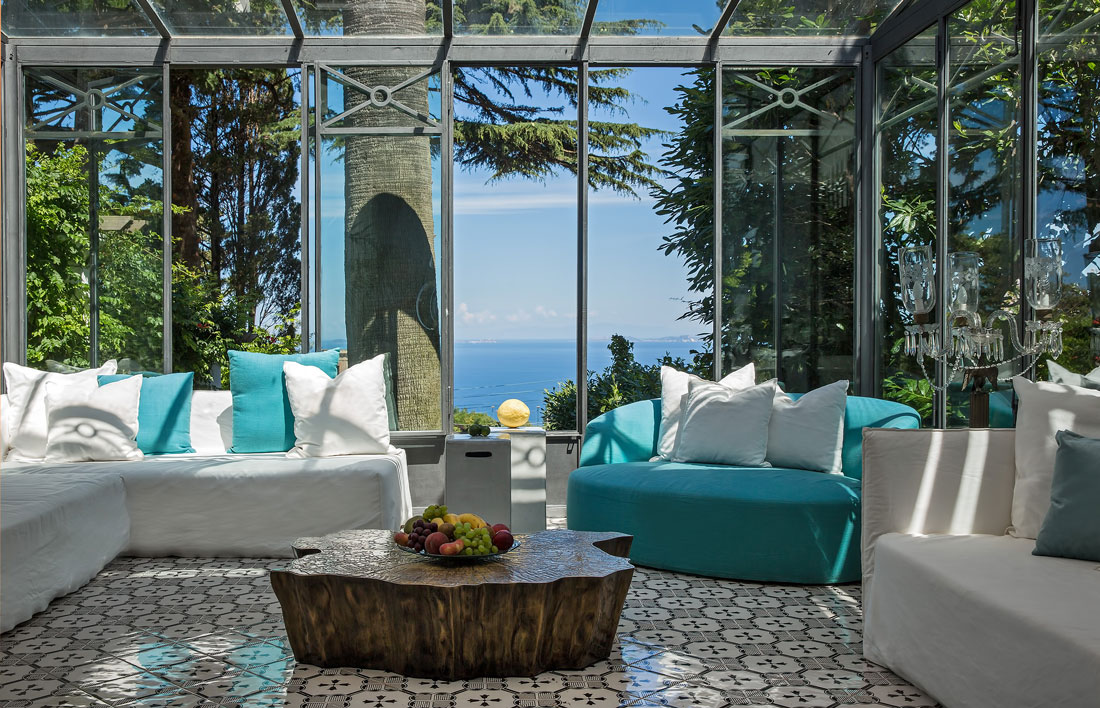 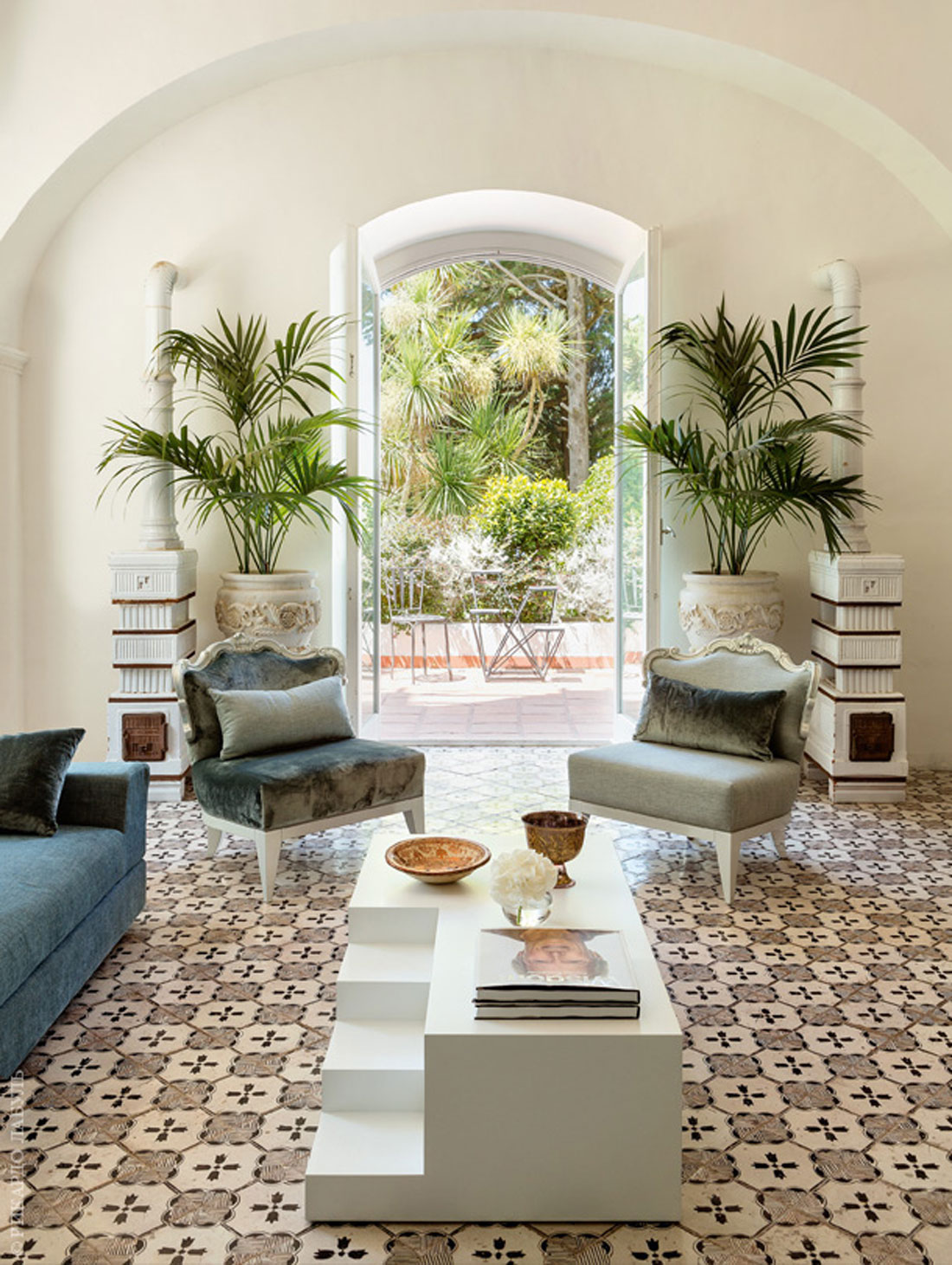 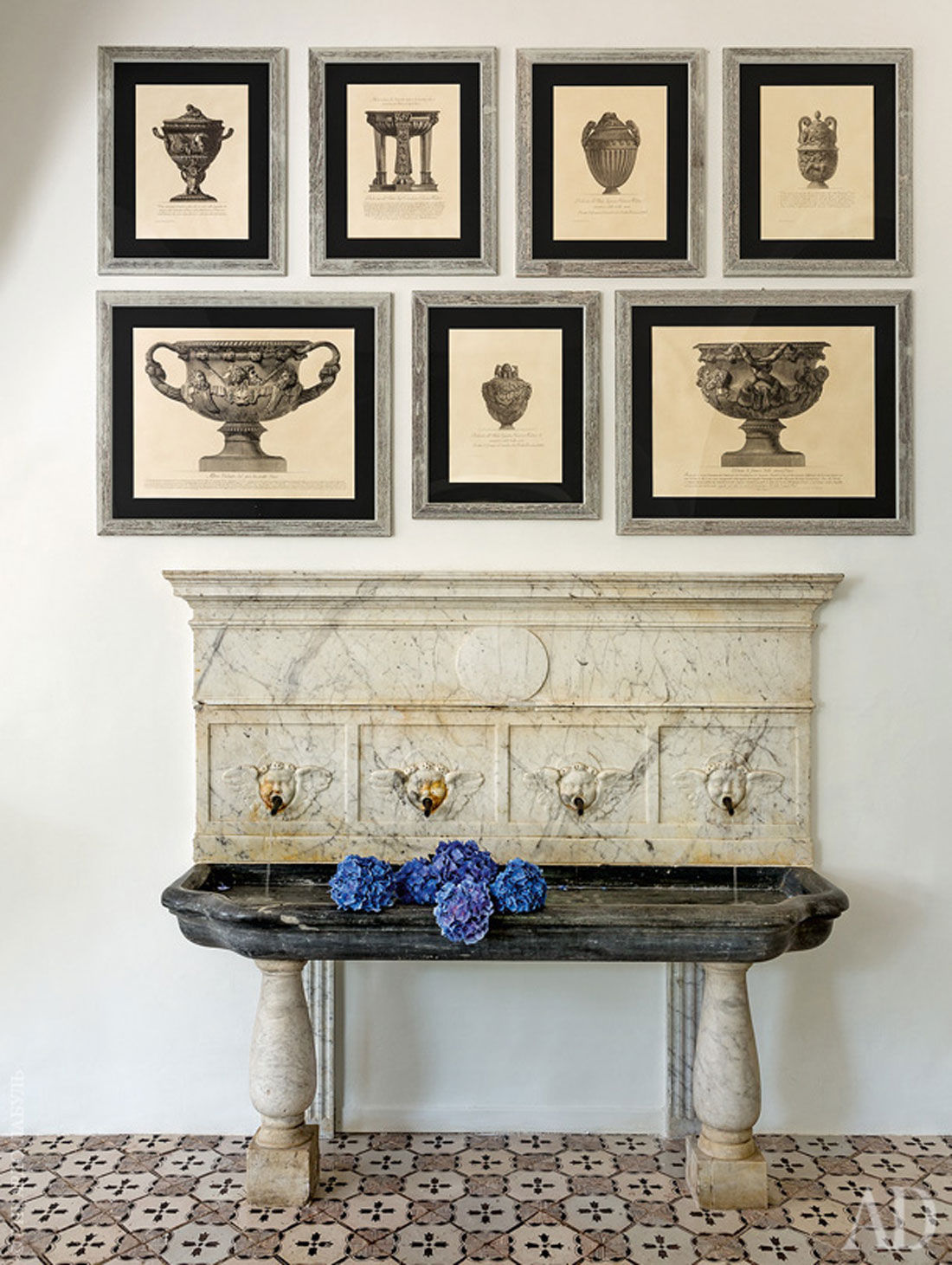 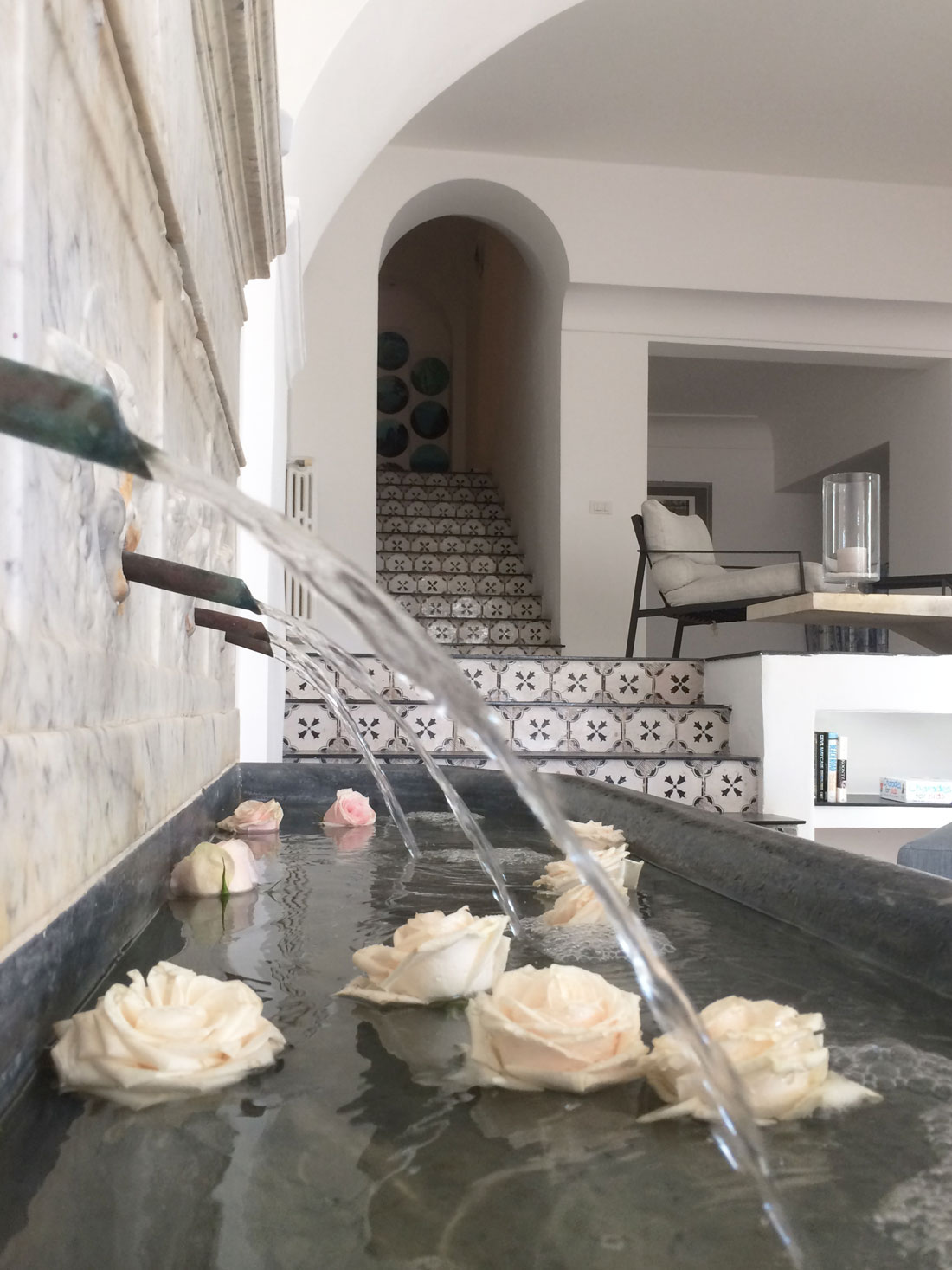 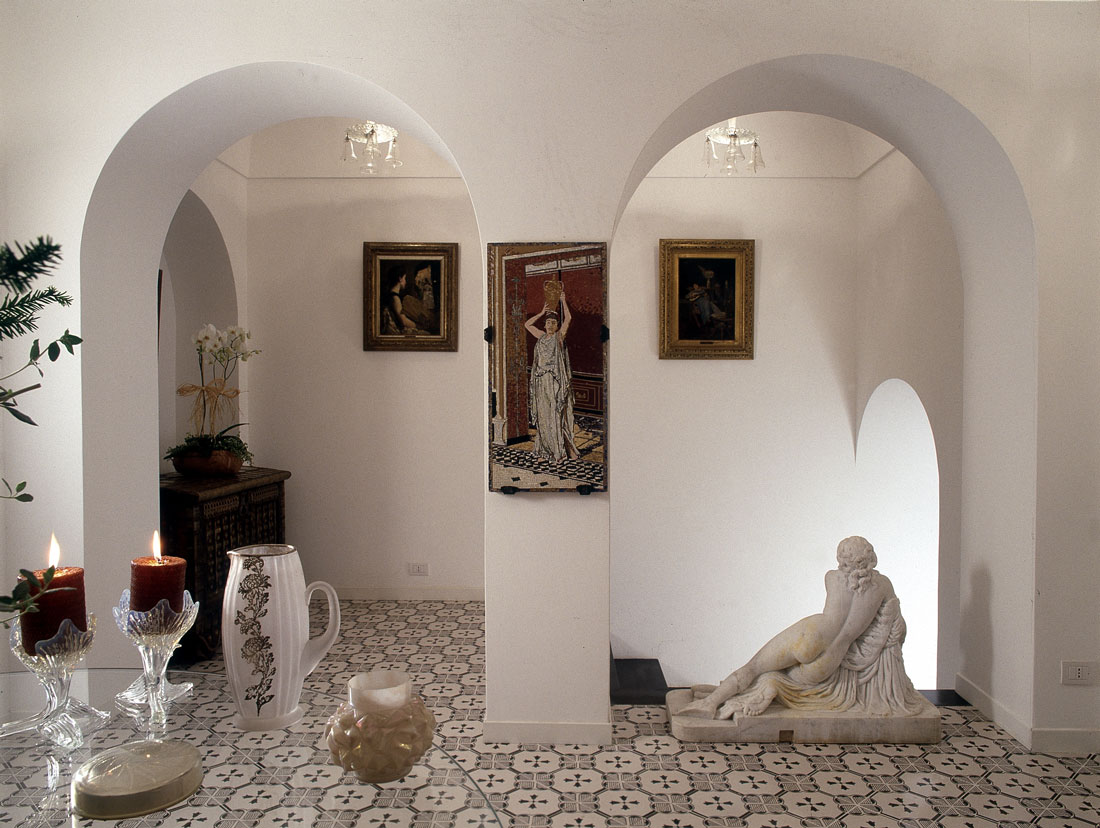 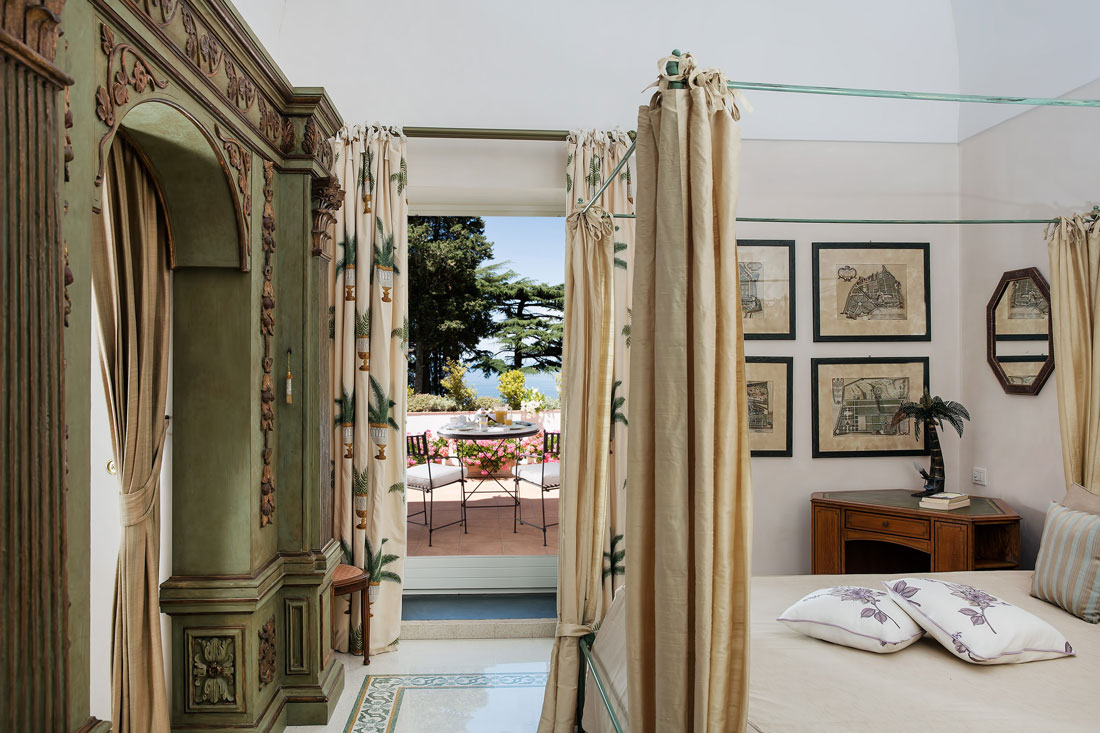 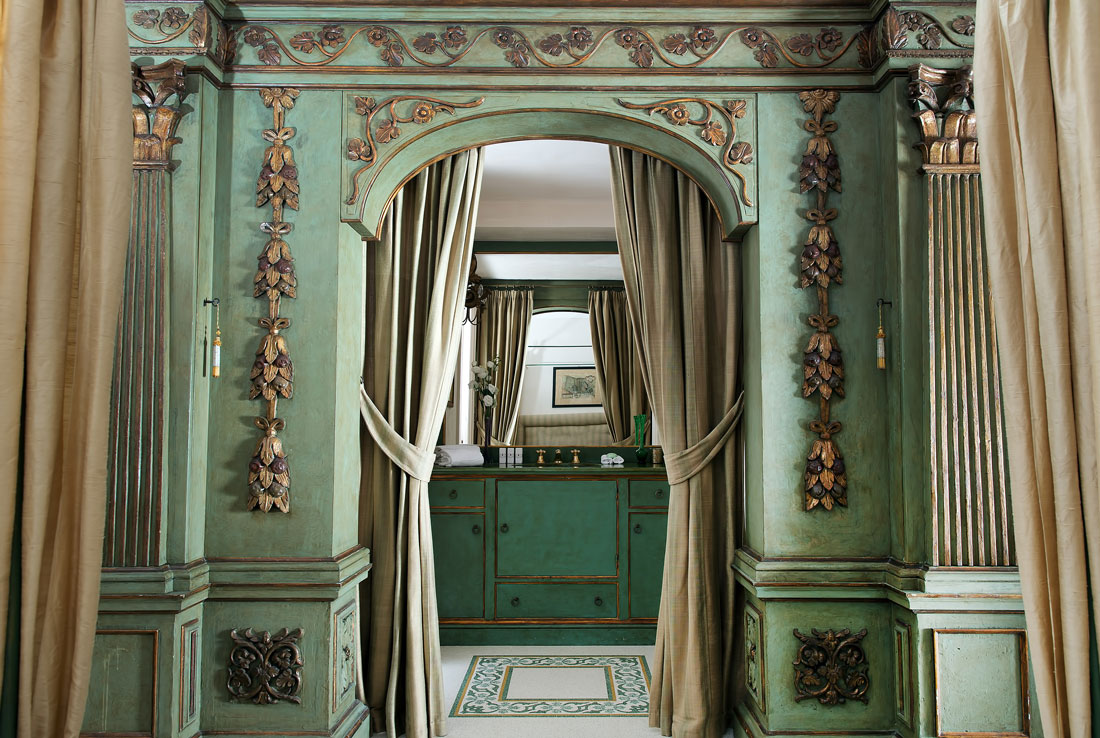 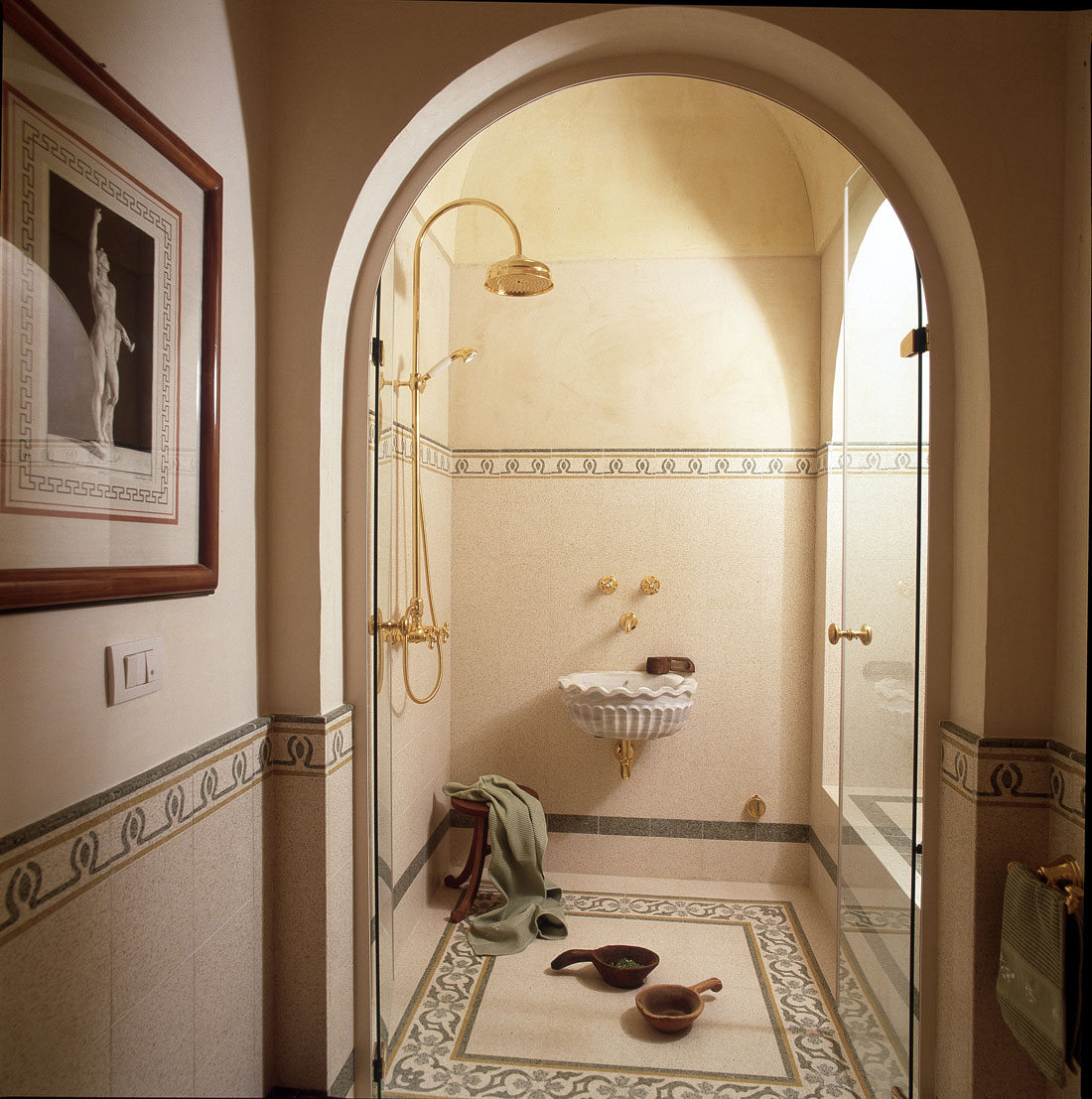 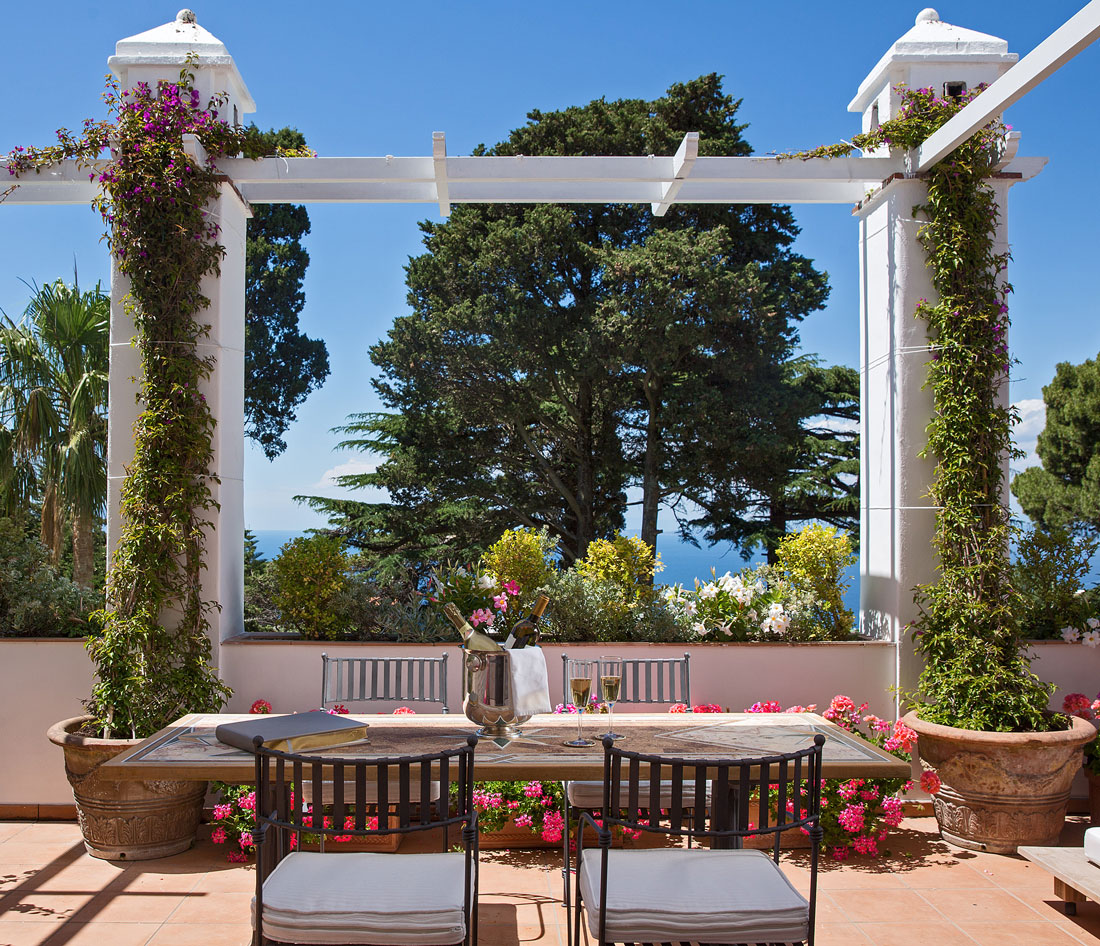 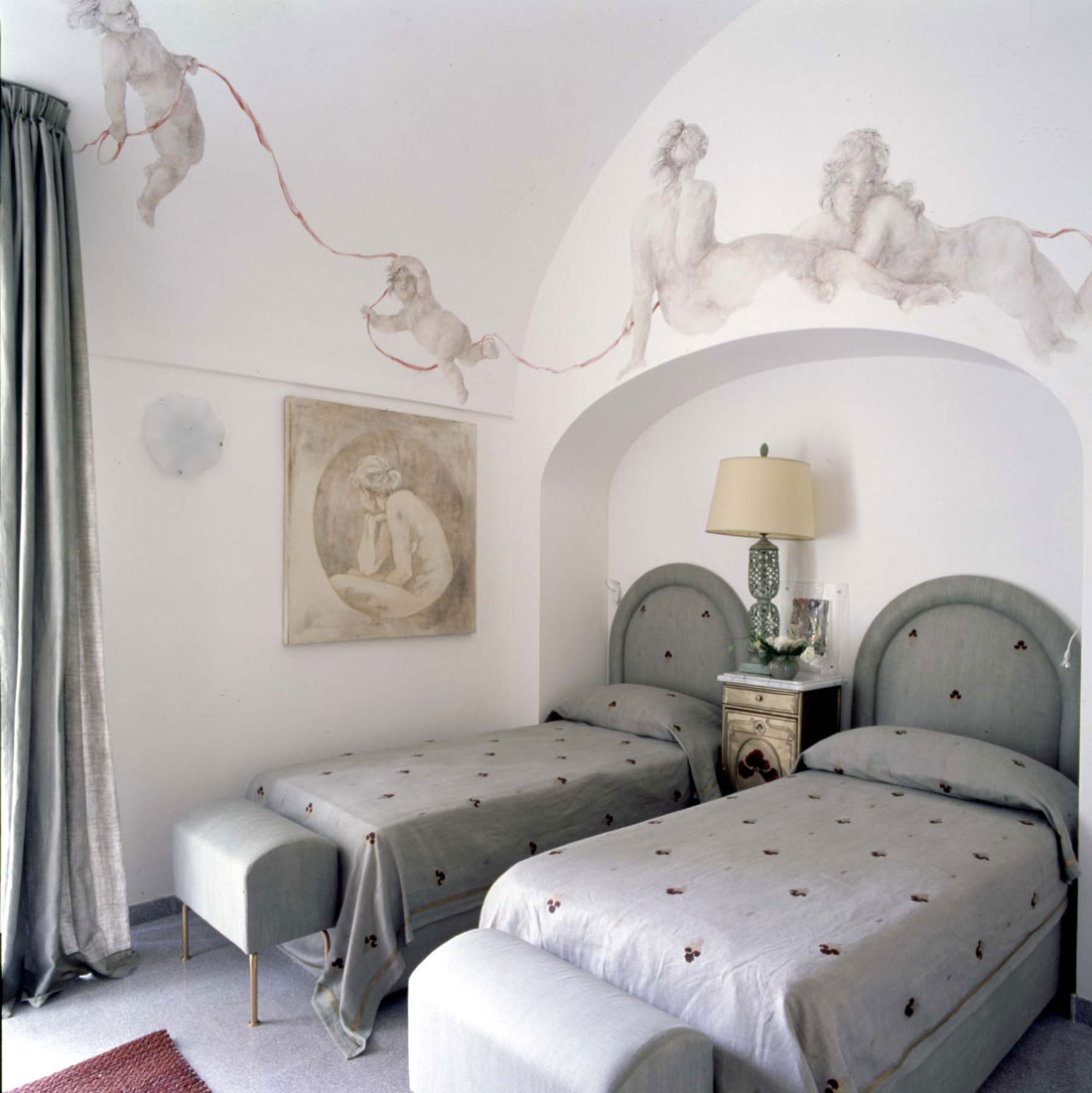 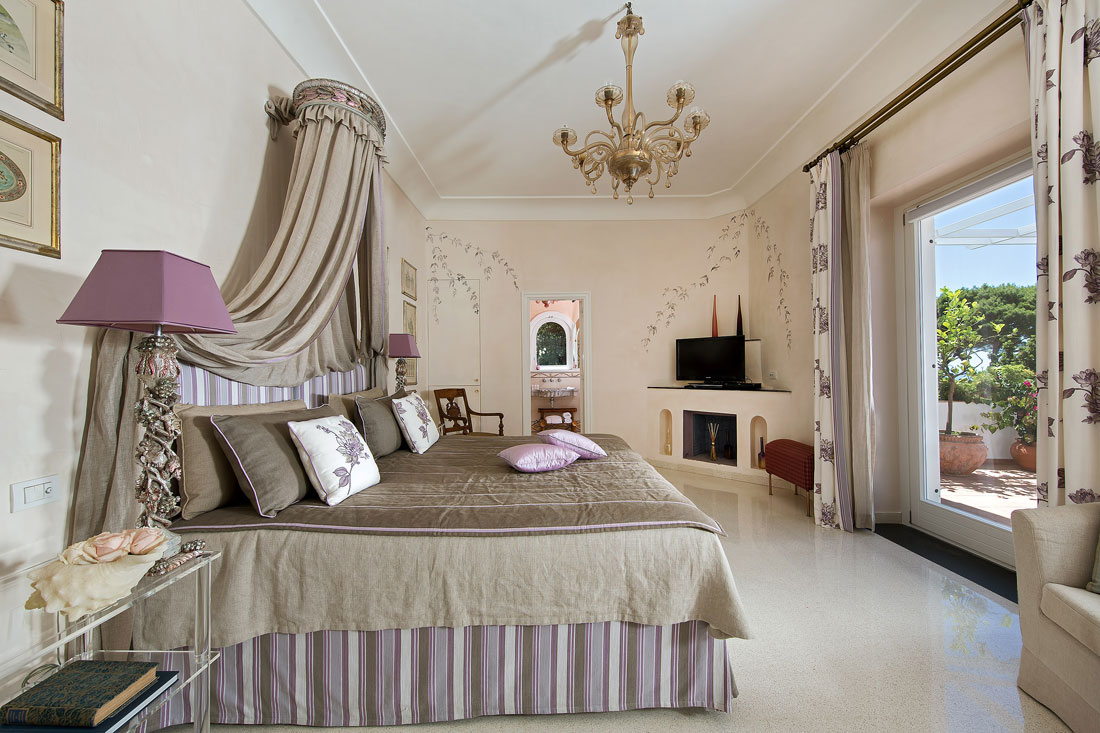 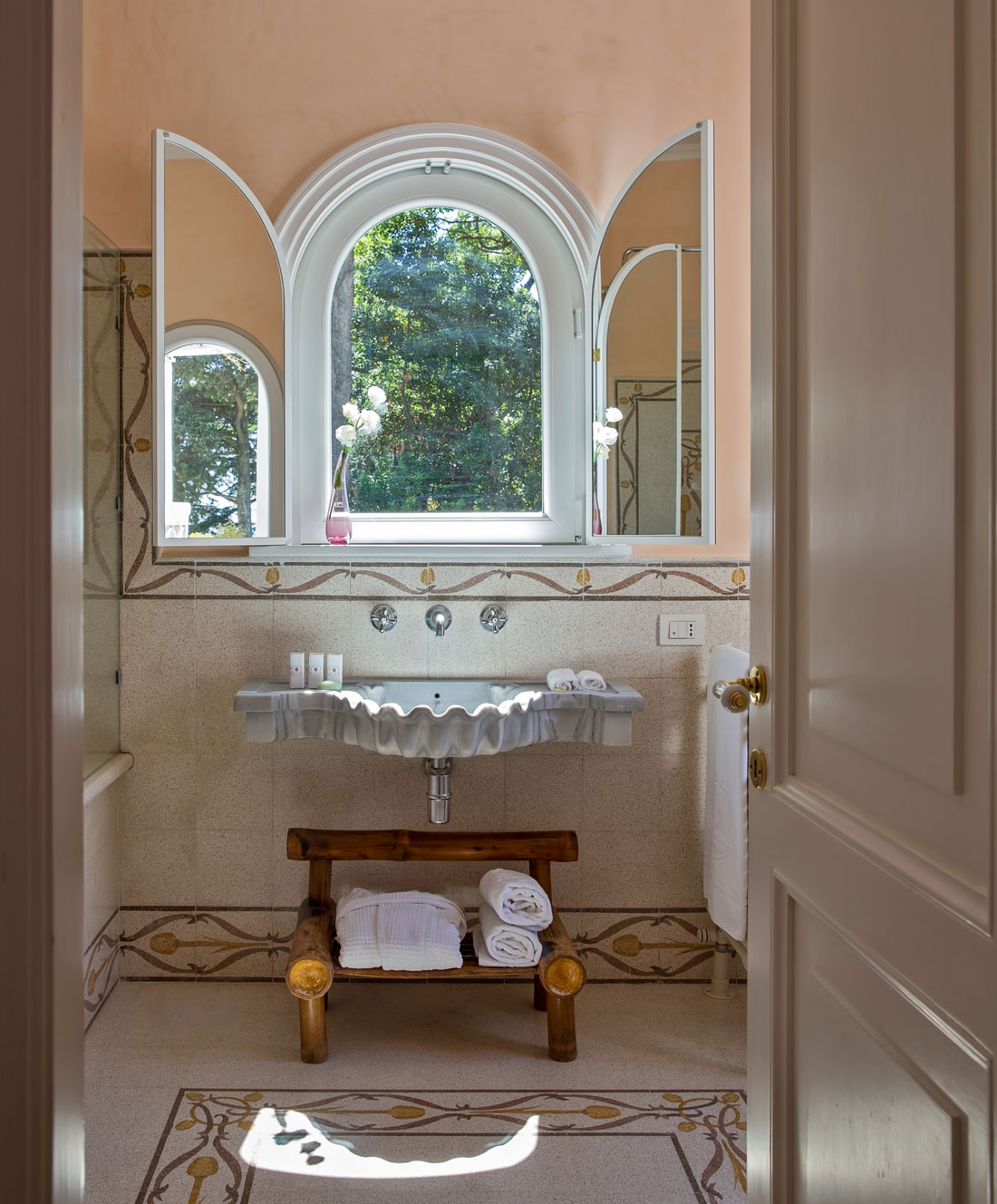 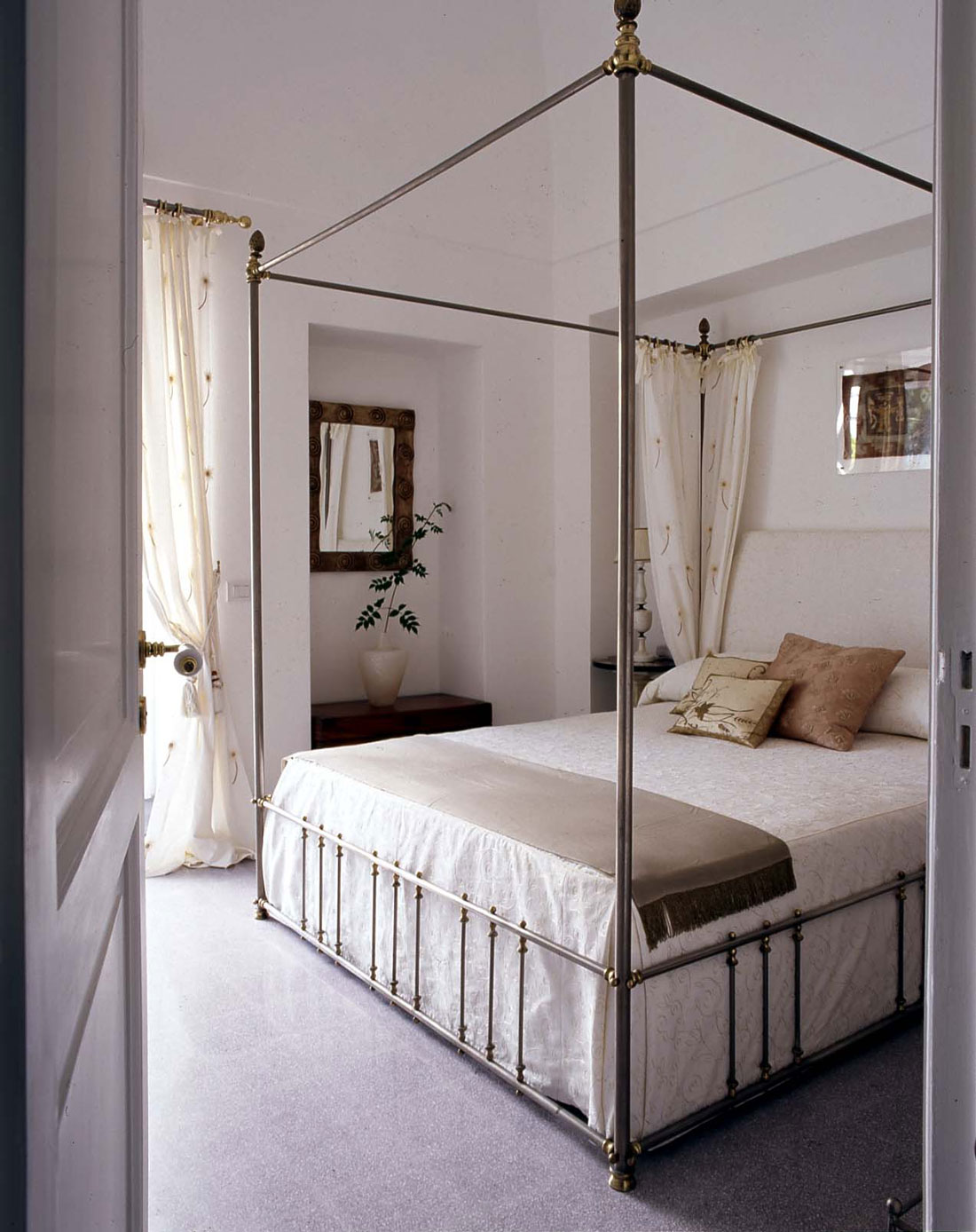 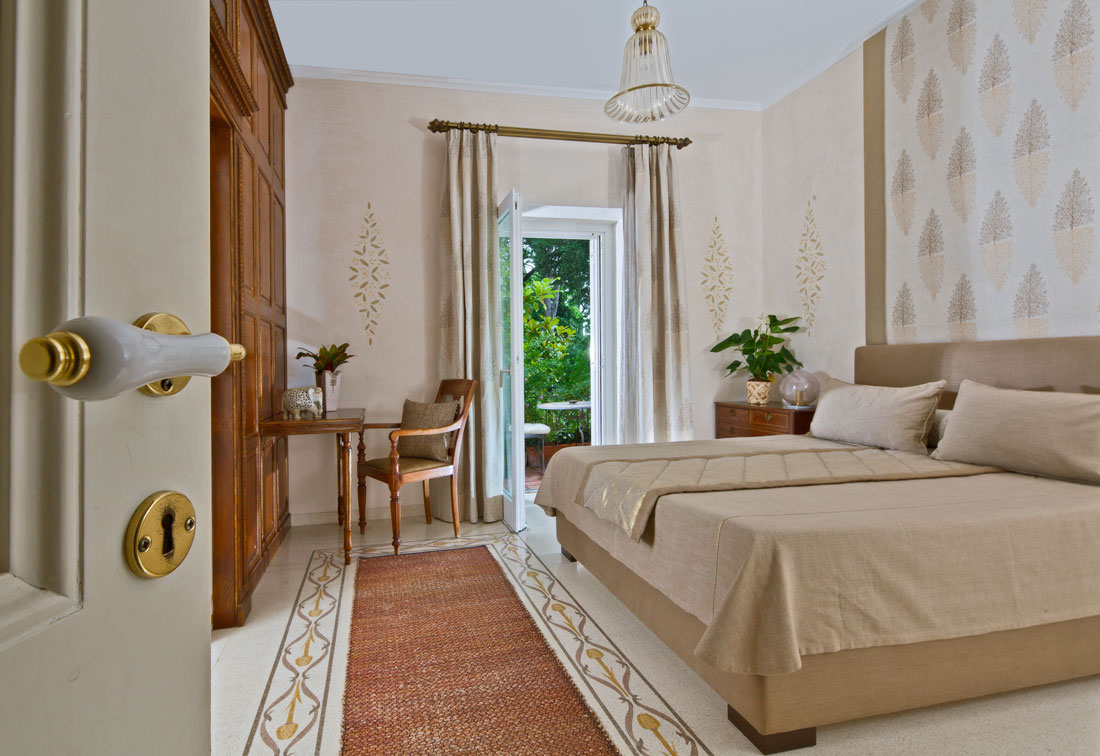 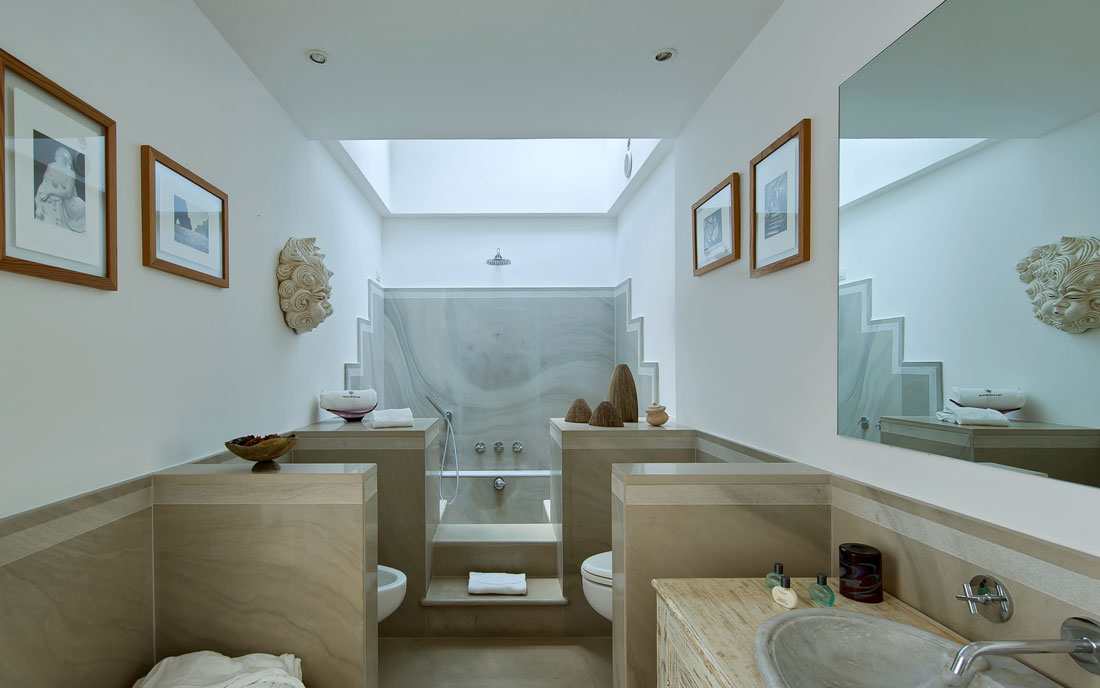 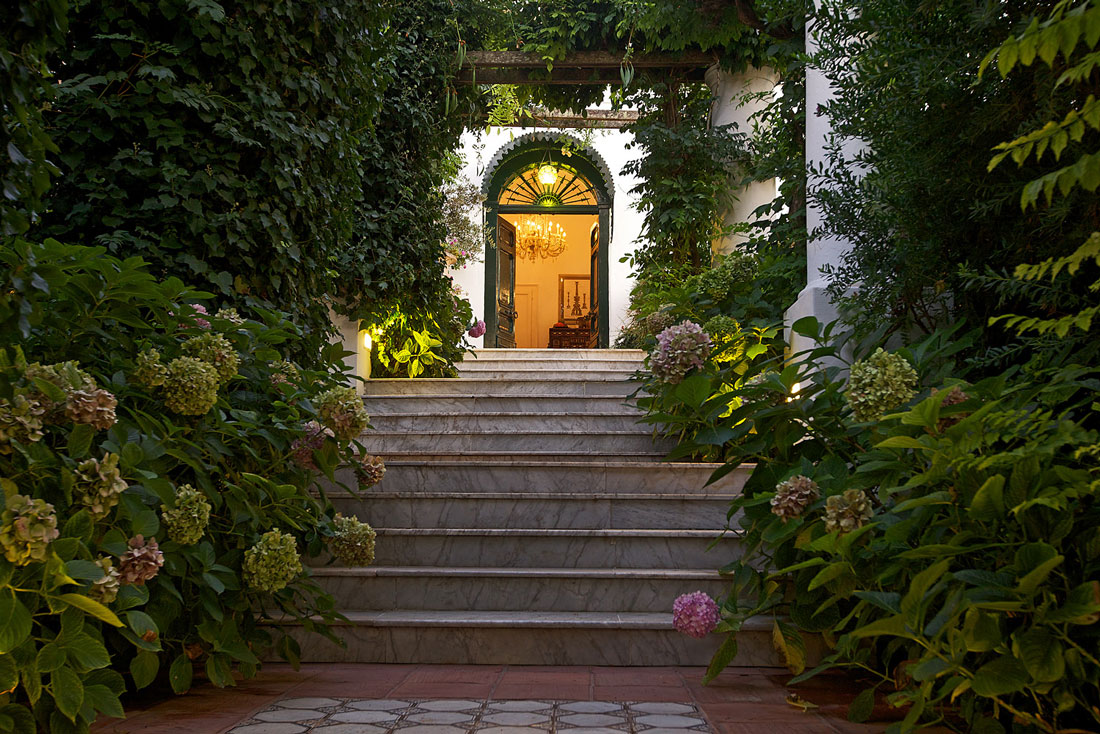 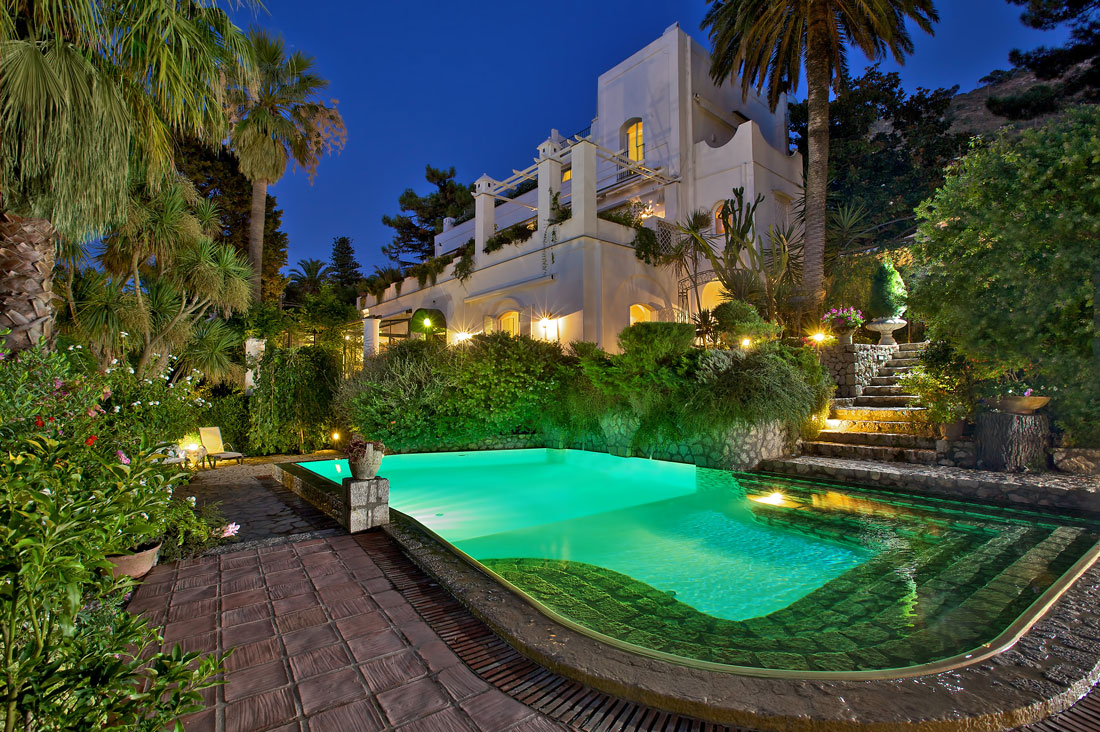 Hidden in the narrow streets of Anacapri, on the Island of Capri, behind majestic green iron gates and 10 feet high limestone walls is the secluded property of Villa Le Scale. The history of Villa Le Scale dates back more than 150 years. It is one of the few remaining historic villas of Capri and was once the residence of the noble family Monti della Corte during the late 1800’s (whose coat of arms is still present on the pillar gates). Once you enter the gates it is obvious that the villa possesses one of the most beautiful gardens on the island that features a striking stairway with a Capri style pergola covered with climbing bougainvillea leading to the entrance of the villa situated at the top of the property from where there is a spectacular view of the Island and mediterranean sea below. The villa takes its name from this imposing entrance – (Le Scale – The Stairs ). Despite its size (about 1500 square meters) the garden is a vibrant and abundant mix of different species of trees, plants, flowers, sculptures, fountains and picturesque spots.

The villa, an area of about 400 sq. meters, consists of a ground floor comprised of a large living room, dining room, kitchen and service area, while on the first floor there are six bedrooms, all en-suite and each with different names that evoke an atmosphere of the last century.

The property was modernised around 2002 by the then owner because it was in very poor condition to make it a residence for personal use and for friends and international guests visiting Capri. Francesco Della Femina a local architect and designer was commissioned to restore both the villa and the garden. He achieved his intention to revitalise the whole property, transforming it into a comfortable villa, luxurious and contemporary while preserving its fascinating historic and architectural charm.

The inspiration was to evoke a fresh and contemporary lifestyle setting while keeping the feeling of exclusivity and nobility that the old villa still maintained. Ideally he wanted to create an enchanting place in which to live while being surrounded by the charm of a historic home without feeling the weight but rather feeling inspired by the history. This concept was made possible thanks to a close collaboration with the owner who provided many antiques and works of art and furnishings used in the composition of the interior, such as the ancient wood paneling, marble sinks, sculptures, vases, etc… which Francesco used throughout the house.

The ancient black and white hand painted tiled floor of the ground floor was restored and preserved. The upper floor, which had been completely destroyed, was designed by Francesco. He created hand-made graniglia (marble & concrete) flooring with a different decor for every room.

In designing the interior, great importance was given to the ceilings which resulted in creating a series of masonry vaults typical of Capri, such as the pavilion vault built in the dining area, which was constructed by local workmen who inherited this skill from their fathers before them.

The villa required a long structural process followed by the necessity to make the rooms more functional as well as creating independent access and a private bathroom for each room. Given the narrow often steep streets of Capri, materials were carried either by hand or by small buggies. Due to these facts the entire project took around five years to complete.

Francesco designed a stylish, scenic swimming pool that was built nestled into the rocks of the garden as if it had been part of the house since the time of its construction.  He did so by using a pre-existing cistern located under the steps that ran the length of the garden that used to be an eye-sore in the otherwise scenic garden. The pool was constructed without interrupting the natural architecture of the  villa by keeping the steps as the entrance to the pool, making them a feature as opposed to a limitation.

All existing trees and plants were retained and integrated with new shrubs and vegetation. Francesco Della Femina also designed and created a system of paths and functional spaces, including a Kneipp water walkway used for its healing properties for the feet and legs, making the garden a place for leisure and relaxation.

Recently, the villa was bought by new owners who commissioned Francesco to restore the areas that needed freshening up. They have used a personal friend to bring in new furniture in the living and dining area.